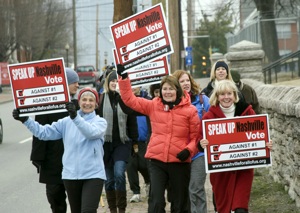 Andrea Conte, Martha Cooper, and Anne Davis, the wives of Governor Phil Bredesen, U.S. Representative Jim Cooper, and Mayor Phil Bredesen, respectively, walked from the Metro Courthouse to the Election Commission earlier this week to show their opposition to English Only and early vote against amendments #1 and #2.  Here is an excerpt from the Tennessean story:

Andrea Conte and Anne Davis, the first ladies of Tennessee and Nashville, respectively, walked almost two miles with supporters from the Metro Courthouse downtown along Second Avenue to the Davidson County Election Commission offices at the Metro Office Building.

They were joined by Martha Cooper, wife of U.S. Rep. Jim Cooper, D-Nashville. Cooper has already cast his vote against it. He was out of town and couldn’t vote with the governor and mayor.

They cast early votes against the English-only amendment.